Raj Delik was born in the Ukraine, and for over an year now has been a pride owner of a Bulgarian passport which he got supplied on account of his Bulgarian origin. Respect Consult OOD stood beside Radge all the way from application through procurement of passport.
Mr Delik makes a successful carrier as a consult on digital economy matters, he is the exec of Crypto Finance, the first Ukraine consultancy office in the province of crypto currencies. He’s started an own YouTube channel named „Цифровой Кочевник“ (the Digital Nomad) where thousands of subscribers can access his video tutorials on how to trade with crypto currencies and investments.
He has been interviewed by Nikolay Vassilev – an immigration solicitor, and some of Respect Consult’s team.

With me, it’s always been dreaming about having a Bulgarian citizenship, reason being that my father and his parents were ethnic Bulgarians. In springtime 2015, I paid my first visit ever to Bulgaria. I was exhausted with the long-wired drive; however, I was much pleased with the idea of getting started on the way to having a Bulgarian citizenship. When I was put the question in the Ministry if I know about the Bulgarian feasts, and they were interested to know about the reason why I should be willing to become a Bulgarian national, this brought me back into my early teens. I used to visit my granny where my heart went out listening to her talk about Bulgaria, its nature, its customs, and its people… what made me dream about tracing my origin back to it one day.
My sights having been set on working my way successfully through the procedure from application through passport procurement, it was the law office which assisted me in it all. I appreciate the advice of my friends who put me through to Respect Consult the moment I resolved to make my dream come true.

Did you happen to pay a visit to Bulgaria meanwhile? Did you take the chance to travel without restrictions being an European passport holder regardless of the limitations imposed by the pandemics?

It was just a year ago, March 8, 2020 when I flew from the Ukraine to Sofia to collect the president’s decree for citizenship, and to produce the requisite papers to get an ID card and an international passport. Today, Bulgaria is an EU member state, as such, being a Bulgarian passport holder translates into having an EU citizen status. I was anxious waiting for it; yet, I got my credentials procured. It was just a year later, March 2021 when I came back to Bulgaria. To be sure, speaking of which, it was no easy year both to me and many people on the globe given the pandemics. Travelling options with many were severely restricted. And I was so much pleased that I had a passport which allowed me to come over with no problems whatever. I took a plane from the Ukraine to Prague where at the passport check I noticed some citizens passing through a separate passageway. Whereas being grounded to do so, I made my way to the section serving EU citizens. There was no customs officer whatever. All I was supposed to do was to take along my Bulgarian passport to the scanner device. Once scanned, I had the doors wide open. Being through, I felt it made a world of difference. To think of it, it was just incredible! This is one of the major advantages that holders of a European Bulgarian passport would enjoy.

It was a year fraught with challenges; on the other hand, a year opening new windows of opportunity. Tell us about advancing your new project, in the province of placing investments in environmental enterprises

Correct, it was a year inviting the improvement of new opportunities. I started a new business that has to do with the environment and getting plastics recycled. This is a hot topic currently, given the two major issues on the globe: first one being the air pollution, and the second one – environmental pollution, in particular, the plastics as a pollutant. Sadly, plastics are not biodegradable which translates into not a single problem.
On January the first, 2021 Europe passed new rules imposing a plastics waste recycling fee to boost plastics recycling. Currently we are very busy with Respect Consult to the point leaning back on the professional strength of this company. They produce pertinent advice on how things stand in this area. Now that I am a Bulgarian citizen, I may be involved into the recycling business on the EU level.
Another major topic proves to be investments in digital technologies. Speaking globally, these score record high this year. Inhabitants on the earth got to know the import of digital assets. With that said, they are getting a higher interest in crypto currencies. Many of the big corporations started investing in crypto currencies such as bitcoin, etc. Now this brought us to the point where the world undergoes an entire transformation into digitation. And as long as someone does not happen to have his/her place on the net, they will not be identified anywhere. Having the pandemics this year, we saw education going digital as well. Shops, cafes, restaurants all have been going online both for collecting orders and serving supplies, with that shopping/selling pattern becoming the very fact of life. Websites such as Amazon have let their owners make a fortune. Consultancy services, medical services, money is sure to go digital just as well – this being irretrievable.

Would you recommend to all who have credentials proving their Bulgarian origin to take the chance of being procured a Bulgarian passport?

Needless to say, no means, do take the chance. Get that citizenship for this will let you make business a lot easier. As one of my financial tutors Robert Kiyosaki puts it, wealthy people are well-to-do for they look for legal ways to the point, be it so by paying less taxes. Bulgaria is one country to let optimum taxation. It was in Bulgaria that I met an Italian friend of mine who operates a company only here for he is supposed to pay less taxes and is more facilitated in running his business. Such advantages and some more on the way will be yours as long as you have a Bulgarian citizenship.
I have two children who have already become adults, so they too were happy to have their Bulgarian passports. Honestly, initially I started the citizenship-related procedure not being pretty much aware of how important this will eventually prove to me personally. On the other hand, I wanted to provide this opportunity to my children. For a child having a Bulgarian citizenship is sure to take the shortcut to education in the European Union. Should you have children, just think about providing for a better future to them. For nowadays theirs proves to be a more social life, talking across social networks such as Instagram, YouTube, tik tok. They happen to be living across the globe, making friends on various continents, so the European citizenship provides them a better travelling opportunity.

Besides Bulgarian citizenship as one safe investment bet, what else would you call people’s notice to with the view to set a safe stage for their future?

You know, I’ve got to know from a person who paid a business visit to us in the Ukraine a couple of years ago who told me: “If you have a child and you want to make sure he/she has a nice future, buy them a bitcoin and let it stay put in thier wallet. Over time your child will happen to have no less than $ 1 000 000”. At that time I was a bit skeptical about this statement. However, bitcoin cost 1000 dollar back in 2017 and it was only by a long stretch of imagination that we would believe its value may sky rocket into 1 mill dollar. Now, however, it is quite a different picture, and I got to know this may just be real, therefore I would advise you to do so. Speaking of which in addition to the benefit of getting a Bulgarian citizenship, and you may got to have it not only on ethnicity grounds.
I would always insist on three rules of investment:
- make use of your saved money 1 bitcoin or just one hundredth of a bitcoin, just as much as you can, mapping out a long-term investment strategy of some 35 years;
- invest in real estate, and in 10-15 years you may be sure your investments will pay back and will yield a nice revenue
- make the best of all chances opened in this life.
Myself, the Digital Nomad and a citizen of Bulgaria, am very pleased with having shared my experience with you today. 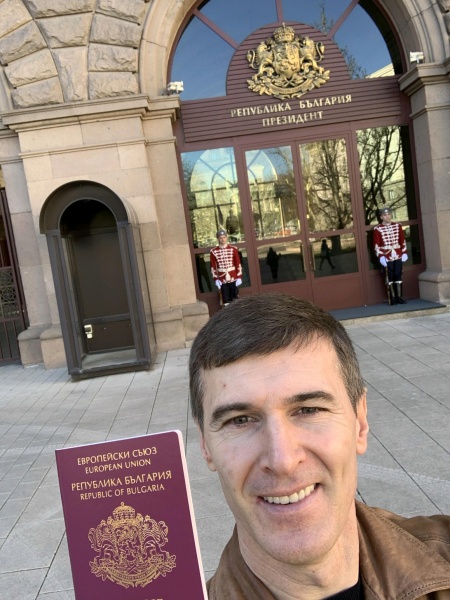